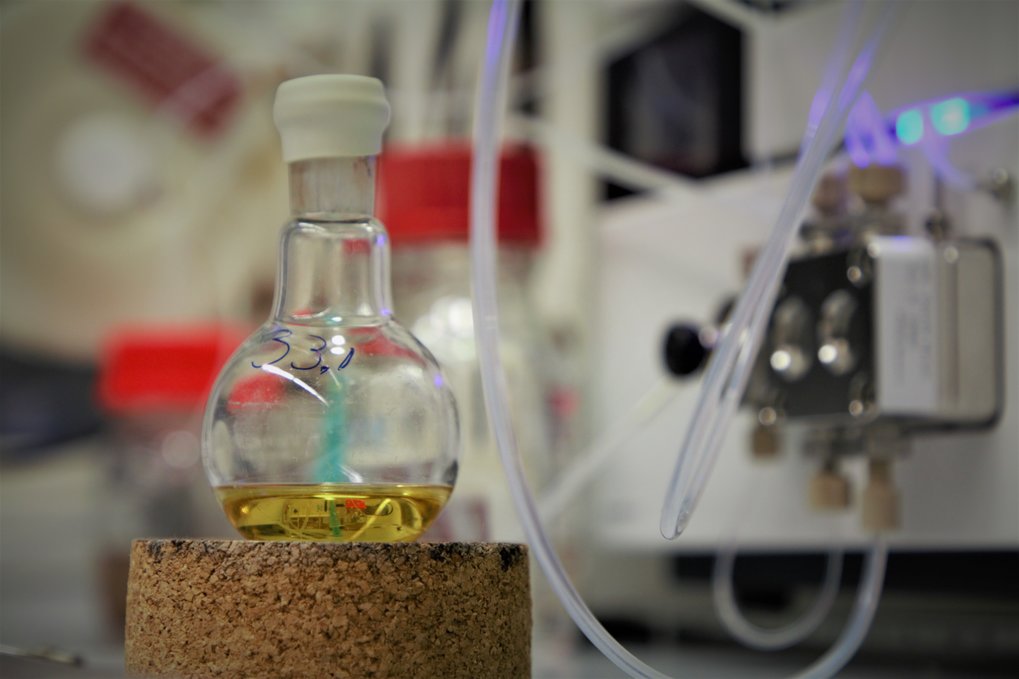 Inarguably, the success of the vast majority of chemical transformations is reliant on the degree of control exhibited over a wide range of variables such as stoichiometry, temperature, reaction time, mixing, and exposure to light. Utilizing flow chemical techniques – where reagents are passed through a set of conditions via thin tubing as opposed to applying conditions to a round bottom flask – has allowed for achieving chemistries and efficiencies previously inaccessible. The modular nature of this technique has also facilitated the development of a novel means of chemical synthesis, which targets core functionalities as opposed to specific molecules, allowing for multiple derivatives to be produced with a single flow system.

At its core, the essential focus of an organic chemist’s pursuits is control over molecules – whether this is expressed as regio- or chemoselectivity of functional group transformations, the formation and utilization of reactive intermediates, or precision in reaction conditions. For a number of applications, a significant increase in molecular and environmental (reaction conditions) control can be achieved using flow chemistry. This technique, where reagents are passed through tubing held at a precise set of conditions, is particularly advantageous in high temperature/pressure chemistries, multi-phasic systems (gas/liquid, liquid/liquid), very fast reactions, and photochemistry.

Flow chemistry is modular in nature, allowing for its components (pumps, mixers, reactors, etc.) to be arranged in any number of combinations. This built-in flexibility has allowed for a wide variety of applications. Recently, our group has utilized this technique to probe two major branches of organic synthesis: methodology (developing new reactions and studying their mechanisms) and multi-step synthesis (continuous and semi-continuous processes to produce active pharmaceutical ingredients (APIs)).

Two areas of chemistry which are well suited for flow are the utilization of dangerous reagents and photochemistry. The reasons reactions using dangerous reagents are often converted to continuous flow processes are twofold: the amounts utilized at any one time are smaller due to the smaller volume of the reactor as compared to a batch process and the vastly-greater surface area that allows for excellent heat dissipation for exothermic reactions.  One example is our recent work on the alpha-nitration of esters,[i] where highly caustic fuming nitric acid and sulphuric acid are mixed to create a nitronium ion. By controlling the layout and the speeds which the reagents move through the modular system, this reactive intermediate can be trapped by a range of α-keto esters to give the desired product following treatment with methanol. The same reaction in batch was reported to “eject of the reaction material from the reaction vessel”.

The second arena – photochemistry – is better suited for flow chemistry due to the limitations set by the Beer-Lambert Law, which describes the rapid decrease in the intensity of light when penetrating an absorbent medium. As such, by performing photochemistry in reactors thinner than this drop-off point (~1 mm), more rapid and efficient processes can be developed. Photochemistry is also reliant on a molecule being able to absorb light, generally through an extended π-system or a carbon-heteroatom double/triple bond. This limitation can be circumvented through the use of a photocatalyst, which is capable of utilizing photons to drive chemical transformations either through single-electron transfer (SET) processes or through energy transfer.

The first example of SET in flow was shown using a Ru(bpy)3 catalyst.[ii] This simple flow set-up was shown to work for a range of both oxidative and reductive chemistries (Fig. 1). Energy transfer processes nicely showcase the power of flow photochemistry, particularly for the generation of singlet oxygen. This allowed for the rapid examination of a variety of transformations and was utilized to provide the first continuous synthesis of the anti-malarial artemisinin.

The advantage of the flexible reactor module is the ability to control the temperature down to –80 °C, allowing for control of reactivity. This is critical in the singlet-oxygen-mediated oxidation of primary amines, where the resultant aldimine is immediately trapped by starting material to give the undesired secondary imine. However, at –50 °C the desired oxidation occurs cleanly, and can be trapped with a cyanide source to give the valuable α-aminonitrile functionality.[iii]

Molecular complexity can be quickly added by coupling two reactors together in either a continuous or semi-continuous process. This is advantageous when the product of the first reactor is unstable – as in the case of α-aminonitriles. One value-adding transformation is the hydrolysis of the nitrile portion of the molecule to give α-amino acids, achieved rapidly in flow (40 mins vs 48 h in batch) by reacting a concentrated HCl solution above its boiling point under pressure.[i] A gas-liquid reactor can be exchanged for the HCl unit, allowing for carbon dioxide to react with the α-aminonitrile to give heterocycles called hydantoins (Fig. 2).[ii]

Coupled reactors can also be used to design processes towards the synthesis of valuable small molecules such as APIs. For example, using precise control over reaction times, an ortho-lithiation of 1,4-dichlorobenzene using n-BuLi was achieved. This reactive intermediate was subsequently trapped by an acylating agent, and this serves as the first step in the shortest-ever (3 steps) semi-continuous synthesis of the HIV medicine Efaverinz.[i]

While processes can be developed to synthesize specific molecules, there exist a number of high-value molecules and APIs which share the same core functionalities. By coupling flexible, chemoselective reaction modules together it is possible that a multistep process can be created which targets structural cores – independent of the pendent functionalities. As these reaction modules are not dependent on the preceding or succeeding reactions, they can be interchanged to access different structural cores. This allows for an assembly-line approach to organic synthesis.

These chemical assembly lines can be arranged in in either a divergent or convergent manner. The first example is the extension of the artemisinin synthesis to yield all artemisinin-derivatives which serve as the WHO-recommended first-line treatments for Malaria. This three module process was further extended to include continuous purification, producing >99.5% pure material (Fig. 3).[i]

The power of this approach was showcased in a series of publications utilizing a pool of eight reaction modules (Fig 4).[ii],[iii] These modules were arranged in divergent and convergent processes to produce five different structural cores and ten different active pharmaceutical ingredients. No intermediate purifications were used for any of the developed processes. 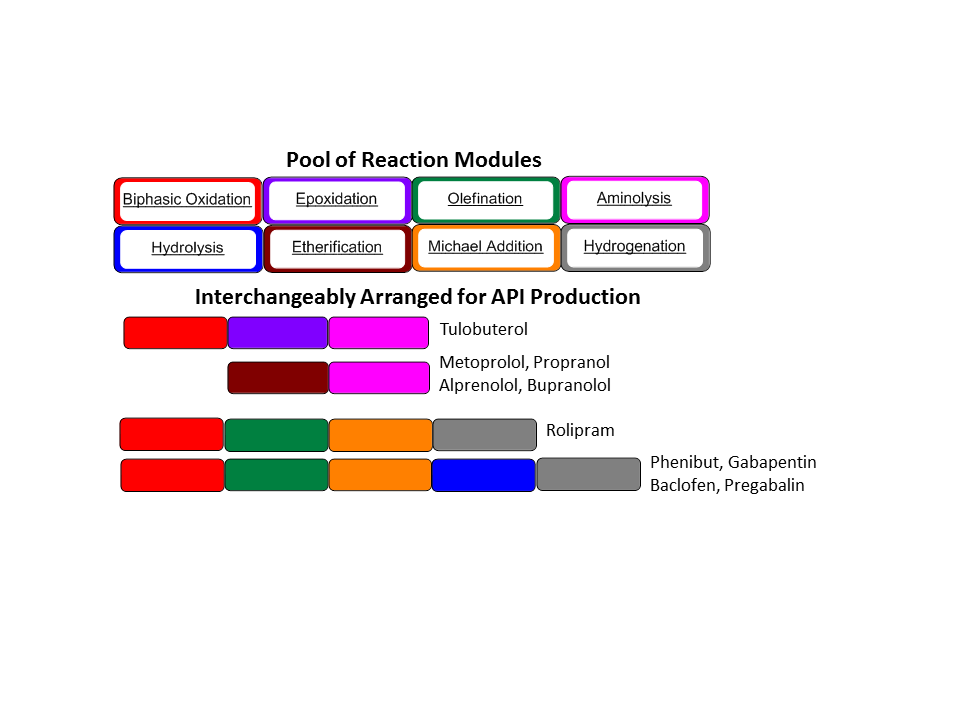