Max Planck Institute of Colloids and Interfaces, Am Mühlenberg 1, 14476 Potsdam

Mammalian carbohydrate receptors are involved in cell migration, pathogen recognition, uptake and processing, and determine many aspects of cellular communication. In particular, a large number of carbohydrate receptors are found on cells of the innate immune system. Strikingly, many of these receptors are uniquely expressed on defined immune cell subsets allowing to specifically address these cells in their complex biological environment. Hence, these cells, initiators and regulators of an effective immune response, are attractive targets for the therapeutic modulation of the immune reaction.

Consequently, small molecule modulators of these carbohydrate-protein interactions would be beneficial for basic research and therapeutic intervention. Unfortunately, carbohydrate-binding sites are often rather featureless and flat and are therefore considered either challenging or undruggable, hampering the development of small molecule inhibitors. Additionally, only a limited number of high throughput screening attempts have been successful against this class of biomolecules. Our work is concerned with the development of glycan receptor-specific ligands primarily resulting from fragment-based screening approaches using biophysical assay such as 19F NMR, STD NMR, HSQC NMR, and SPR. These assays are complemented by in silico approaches as well as screening on chemical fragment microarrays and also by a recently developed cell-based assay that allowed screening our fragment library. Based on these chemical probes resulting from fragment-based design, we explore basic immunological questions as well as applied aspects such as small molecule targeted delivery of stimulants to specific immune cell subsets. 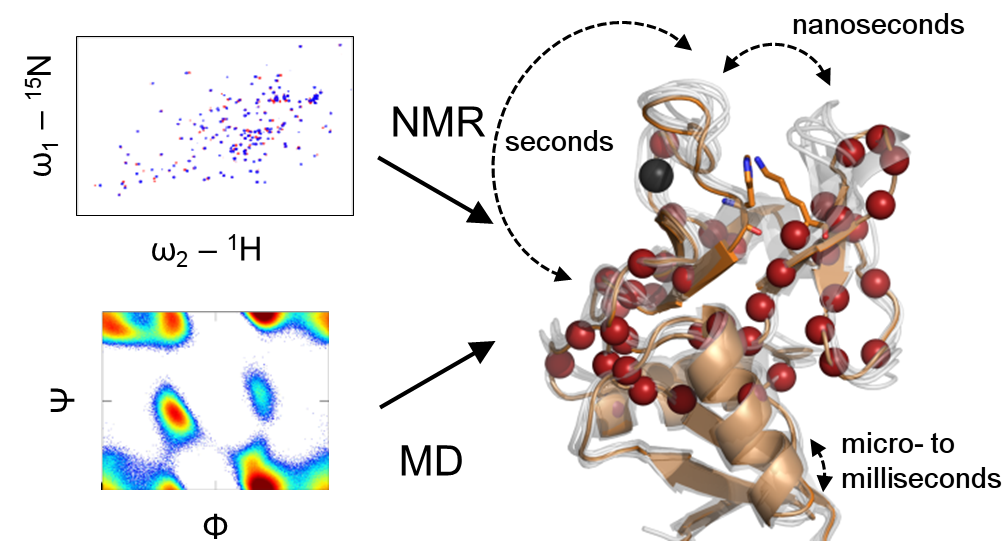 C-type lectins. In particular, we have focused on members of the C-type lectin family, which are expressed on cells of the innate immune system. These cell surface receptors promote pathogen recognition and, in some cases, also endocytosis. This recognition process is based on the interaction of the lectins with glycans found on the invading pathogen, often sufficient avidity is gained by homooligomerization of the receptor. On a molecular level, a central Ca2+located in the carbohydrate binding site allows for the coordination of the glycan. Once endocytosed, this Ca2+coordination can be perturbed by endosomal acidification and reduction of local Ca2+concentration. While Ca2+sequestering directly impairs carbohydrate recognition, pH-dependent loss of the receptor multimerization state results indirectly in cargo release in the endo-/lysosomal pathway. Taken together, C-type lectins harbor several molecular determinants in their overall architecture to promote pathogen binding, but also to enhance cargo release, rendering these receptors rather flexible on various time scales.

Small molecule modulators of C-type lectins. In our search for small molecule modulators of C-type lectin receptor function, we make use of the structural plasticity of these lectins. Previously, we have highlighted the discrepancy between the static picture of these proteins as inferred from X-ray crystallography and the experimental description of susceptibility of these proteins for drug-like molecule binding [Aretz et al. (2014)]. In particular, we found that besides the shallow and featureless carbohydrate recognition site, several secondary sites exist that are partially druggable and offer possibilities for inhibitor design against C-type lectins [Aretz et al. (2017)]. These insights are complemented by our studies into the receptor flexibility using protein NMR in combination with molecular dynamics simulations, revealing an allosteric network of communicating amino acid sidechains. This network regulates the Ca2+affinity and partially its pH sensitivity in human Langerin [Hanske et al. (2016)]. In summary, based on these insights on existence of druggable secondary sites and the presence of allostery, we were able to develop a series of allosteric inhibitors of murine Langerin in the low micromolar affinity regime [Aretz et al. (2018)]. 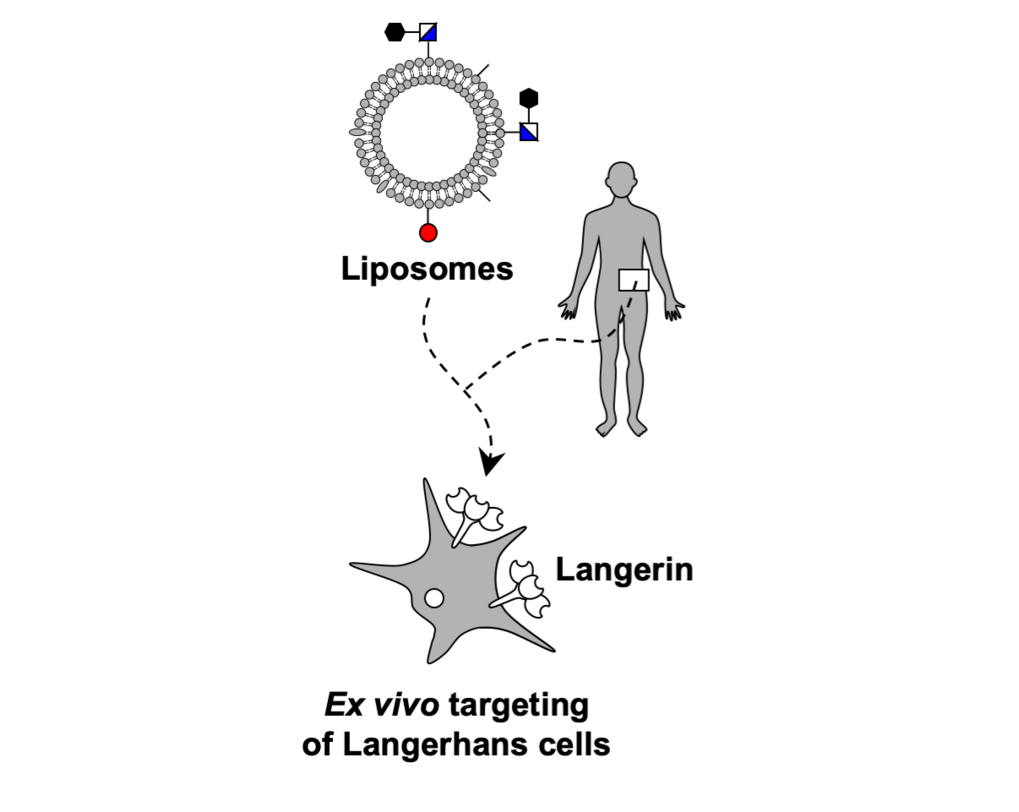 Small molecule-mediated targeted delivery to Langerhans cells. The skin represents an attractive organ for the application of novel vaccines since it harbours a large reservoir of resident immune cells capable of eliciting a systemic response against antigens. In particular, Langerhans cells (LCs) are located in the epidermis, the upper layer of the skin. Insight generated over the past decades has highlighted the ability of LCs to promote a systemic cytotoxic T cell response. These responses were primarily investigated using antibody-based delivery of antigens to LCs and were especially effective when Langerin was used as a targeted receptor. Langerin is a LC-restricted C-type lectin receptor. We have developed a small molecule ligand specific for Langerin that we here explore as the basis for antigen delivery via liposomal formulations[Wamhoff et al. (2019)]. These nanoparticulate formulations can encapsulate small molecules and protein antigens and release their cargo intracellularly [Schulze et al. (2019)]. We were able to show specific uptake of these liposomes into Langerin-expressing model cells as well as primary human LCs. Furthermore, we study their endosomal fate and intracellular processing. Overall, these highly specific nanoparticles potentially build the basis for innovative delivery of vaccines via the skin. 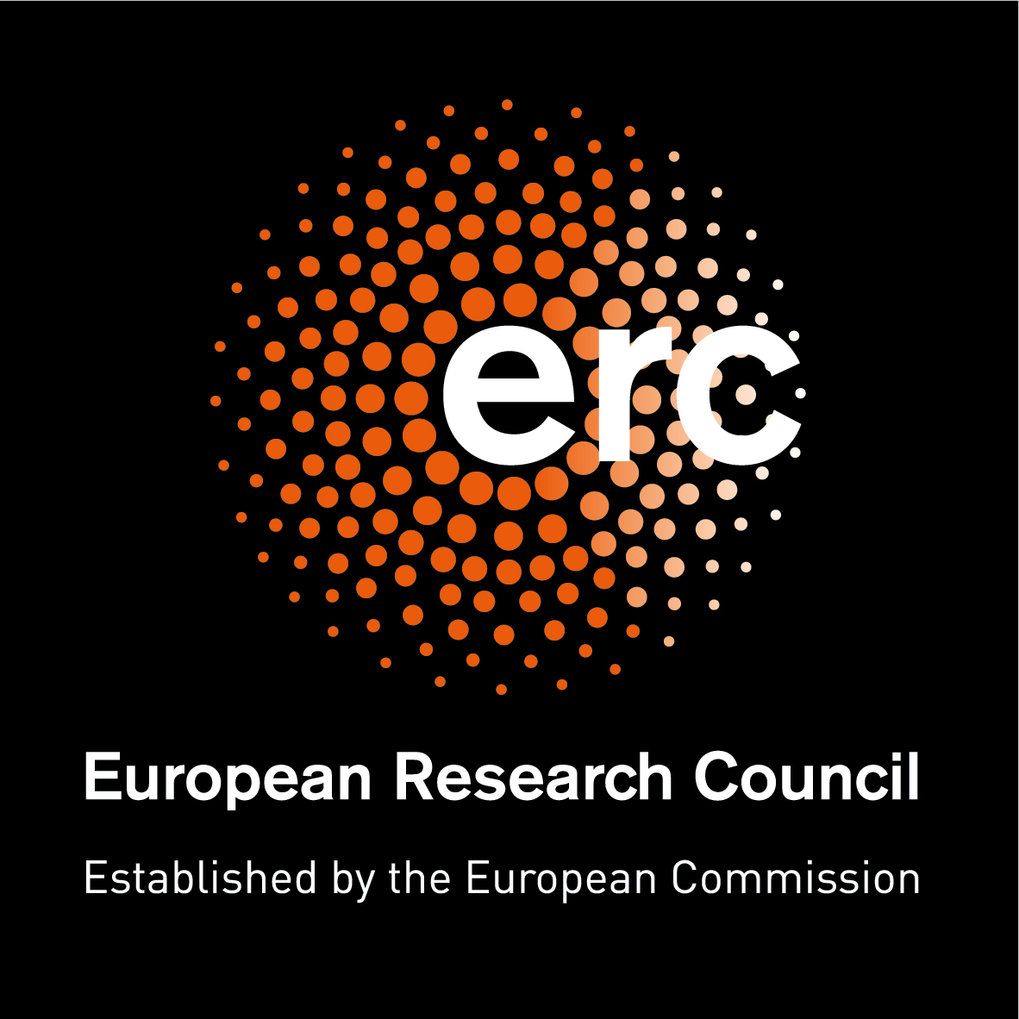 Glycan-based cell-cell communication. Every living cell is decorated with a dense fur of glycans. Multicellular organisms make use of this matrix to encode for specific information such as cellular identity, metabolic and activation status, and circadian clock. Cell surface glycans, present on glycoproteins and glycolipids modulate protein localization, their interaction partners and receptor life cycles. Since glycans are secondary gene products, their formation as well as their breakdown is determined by many factors, not limited to gene expression of potentially over 200 enzymes and transporters. Regulatory circuit arose on many different time scales: very quick alteration of the glycocalyx can be introduced using secreted hydrolases and endo- and exocytosis of glycoproteins. Long-term remodeling of glycans can result from gene expression and histone modifications (further reading Moremen et al.). How can such a specially and temporally regulated, complex and stochastic system encode reliably for information that can faithfully be decoded by other cells through the use of lectin receptors? To address this intriguing question, we have developed glycomimetic tools, small molecules that specifically bind to selected mammalian lectins. These tool compounds are used in combination with nano- and microparticles to ask very fundamental questions such as: How often does a protein-carbohydrate interaction on a cell surface lead to a productive, biological response? How do lectins and glycans find each other on two-dimensional surfaces? How much information can be transferred through such a communication channel and how does this compare to glycan-independent pathways of cell-cell communication?

Our work regarding the fundamental understanding of carbohydrate-protein interactions applying and developing biophysical techniques with a focus on nuclear magnetic resonance (NMR).

As result of our studies into protein-carbohydrate interaction, we contributed to structure-guided ligand design of inhibitors for protein-ligand and protein-protein interactions, with a primary focus on lectins. This work also utilizes multivalent display of lectin ligands.

Our insights into the structural biology of glycan-binding proteins are complemented by a strong interest in the application of molecular modeling and chemoinformatic approaches to these systems.

Ligands that were developed during the above-mentioned projects, were also applied to answer biologically relevant questions. With a focus on applications in the field of glycoimmunology and targeted delivery.

Our contributions to fragment-based ligand design:

We would like to thank the following agencies for their support: