Glycans and lectins are prominent components of microbial cell walls and membranes and most often are the first contact platform with the host cell during infection processes. The interactions involving lectins and/or glycans from the microbial membrane or cell wall and their cognate interacting partners from the host cell membrane are of weak affinity but are crucial for establishing the first contact for invading the host. In the past, these interactions have received little attention partly for their weak affinity, but also because of a lack of powerful biochemical tools to investigate them. In recent years, achievements in the fields of both chemoenzymatic and chemical syntheses have significantly boosted the field of glycobiology by providing homogenous and fully characterized material for biochemical investigations. Our laboratory focuses around the following goals.

Malaria is a major cause of mortality and morbidity in the world and leads to 2 Million deaths annually. Despite many efforts, no final therapeutic solution has been developed to fight the disease. The life cycle of Plasmodium falciparum, the agent responsible for more than 90% of the Malaria cases, involves a blood stage in which the parasite resides and multiplies in red blood cells. One important research focus for developing anti-Malarial drugs is the invasion step of the erythrocyte by the freshly released merozoites. Although many proteins with diverse functions in the process of invasion have been reported the overall scheme of the invasion process has not been completely solved. It’s known that glycosylated proteins on the membrane of red blood cells are important for the internalization of the parasite, with the glycan moiety playing a critical role. In addition, glycan structures on the parasite’s surface might also be involved in the process. Our focus is to understand the actual function of the glycan structures on both host and parasite membranes in order to help clarify the molecular mechanism of the invasion process, using biochemical and cell biological means.

Parasitic infection is dependent on a series of cell-cell interactions between the pathogen and the host. Protozoa use surface membrane components, such as sugar-containing molecules (glycoconjugates) or sugar-binding proteins (lectins) for attachment and adhesion. The group deals with the glycobiology of parasitic and host cell, i.e. the biosynthesis, structure and function of the carbohydrate moieties. In particular, work is focusing on the interaction of apicomplexan parasites Plasmodium falciparum, the causative agent of malaria, and Toxoplasma gondii, with host cells. Targeting the parasitic GPI biosynthesis which is necessary for the post-translational modification of cell surface proteins for developing potential drug and vaccination strategies is the main focus of the work. Increasing amounts of data on the immunological role of parasite GPIs have indicated a need to understand their mode of action to enable the development of novel strategies in fighting these parasites. We are interested in developing specific inhibitors of GPIs biosynthesis. Furthermore, for comparison of parasites and mammalian GPI biosynthesis we are establishing specific parasite enzymes as a target for developing new anti-parasite agents.

To achieve these goals chemical methods for the production of pure synthetic GPIs have been developed in recent years. Several GPI-related structures, ranging from GlcNAc-PI to the more mature ethanolamine phosphate containing and branched GPIs were synthesized. These synthetic oligosaccharides were equipped with a sulfhydryl linker group for attachment to protein carriers for vaccination or for covalent attachment to different surfaces for biochemical investigations. 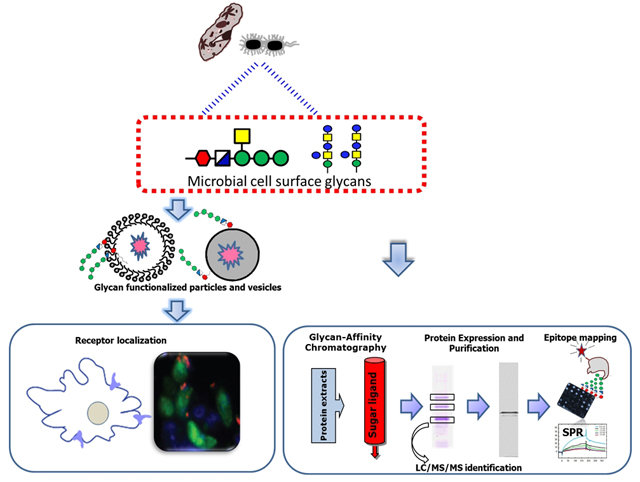